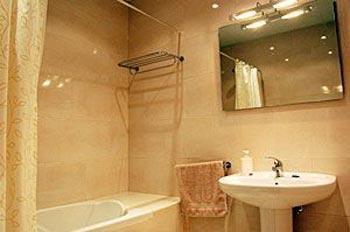 Comparing accommodations in Barcelona? Consider Barcelona bed and breakfast Ally's III. This friendly guest house in Barcelo has a great location in the Exiample district, very close to Gràcia, a cosmopolite district. Barcelona bed and breakfast Ally's III consists of 5 guest rooms in a building that reflects the Catalan architectural styles from the beginning of the 19th century. It is run by a local family that greets their guests with beverages and pastries, and is eager to provide visitor information. Guests are invited to relax in the lounge equipped with a TV, DVD player, stereo, and balcony, and to use the kitchen with a refrigerator and microwave. Laundry service is available at additional charge of €7,00. The guest house is just off the Avinguda Diagonal (Diagonal Avenue), opposite the Casa de las Punxes (House of Thorns), a stunning example of Catalan modernist architecture. Nearby are several landmarks by Antoni Gaudi: the Casa Mila, also called La Pedrera, which is Catalan for The Quarry; the Casa Batllo, sometimes called the Casa dels ossos, or House of Bones; and to the east the world-renowned Templo Expiatorio de la Sagrada Familia (Basilica and Expiatory Church of the Holy Family?). Ally's Guest House Barcelona is a 5 minute walk from the Verdaguer station of the Barcelona metro, which provides easy access to the rest of the city.