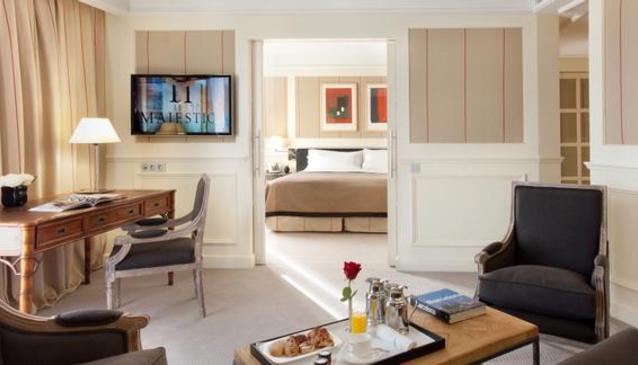 Barcelona Hotel - Majestic Hotel & Spa Barcelona is on the verge of completing an extensive refurbishment project that began in July 2010 taking the hotel to a whole new level while remaining true to its long tradition and values.

The Barcelona Hotel - Majestic Hotel & Spa Barcelona, one of the grand emblematic hotels in the city of Barcelona, housed in an imposing neoclassical style building on the sophisticated Passeig de Grácia, is currently undergoing the final phase of a renovation process that began in July 2010.

The project, coordinated by the head interior designer of the Majestic Hotel Group, Isabel Planas and the renowned Majorcan decorator, Antonio Obrador, will be completed during this coming summer (July 2012). A foreseen investment of 24 million Euros has been allotted to the reformation and restoration of the interiors of the hotel: rooms, hallways and public areas.

The 303 rooms that have comprised the hotel Majestic since the 1970s, have now become 275 after the first two phases of this project, 42 of which are classified as suites. The size of these rooms has been increased so as to provide greater comfort for the guests- an objective that has always been characteristic of this group. The total area occupied by these rooms account for 22,000 square meters of floor space.

Phase one of this project saw the rooms oriented towards Valencia Street completed first and then those overlooking the Passeig de Gràcia, were the focus of phase two.

These accommodations are now ready to receive their first guests. The end results are rooms that have all been decorated in tones of brown, white and beige. They are bathed in natural light, boast high ceilings, elegant lookouts and romantic balconies. Classic delicate furnishings have been combined with more contemporary interior design elements.

The textiles that have been selected to cover the walls are of the best quality linen or cotton, as well as the Trevira used to upholster the vertical paneling, and have been sourced from prestigious brands such as Güell-Lamadrid, Gancedo, Gaston y Daniela o Ralph Lauren.

The bathrooms have been refurbished in grey and white marble, creating a luminous atmosphere of high quality. This same material can be found present in the floors, the hallway finishings and elevators (currently under renovation) thereby creating a unified decor theme throughout the hotel. The exclusive design on the wool carpet laid in the hallways is a mark of identity synonymous of the Majestic Hotel & Spa and has been maintained throughout the project.

The remaining areas and common spaces in the hotel such as the lobby and the bar, preserve the personality and glamour that have become associated with the Majestic, an essential stop in the Ciudad Condal.

An elite landmark in the heart of Barcelona

Almost a century of tradition has made the Barcelona Hotel - Majestic Hotel & Spa Barcelona a mainstay in the hotel sector of this city as well as a select meeting point on the Passeig de Grácia. Film stars, artists, politicians, sports personalities and prestigious business men and women continue to choose these rooms on their visits to Barcelona,

valuing the quality of the accommodations and the efficient and discreet service of the personnel that make up the Catalonian Majestic Hotel Group, under the propriety of the Soldevila family.