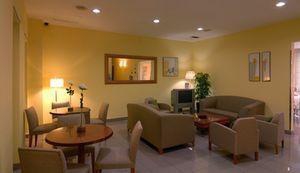 Guests lodging at the Barcelona Hotel Gran Ronda will be located only moments from the Plaça de Catalunya as well as Les Rambles. Also nearby this Barcelona hotel is the Port Olympic harbor, the Portal de l’Angel, and the Gaudi route. Public transit is located nearby, offering guests transit to many attractions, including the Gothic Quarter and the Olympic Stadium. The Hotel Gran Ronda is located only 100 meters from the nearest metro station and 13 miles from the international airport. The hotel is also located near many bus stops within the city, offering access to many attractions and areas within the city, including the Mediterranean beaches.

The rooms at the Gran Ronda Barcelona are colorful and modern and include flat-screen televisions, mini-bars, and wireless Internet access. The hotel also offers a 24 hour receptionist, a coffee bar, a breakfast buffet, daily newspapers, and car hire services, as well as a business center.

Located in the heart of Barcelona, the Hotel Gran Ronda Barcelona is a conveniently located accommodation that offers close proximity to many attractions, shops, and eateries.