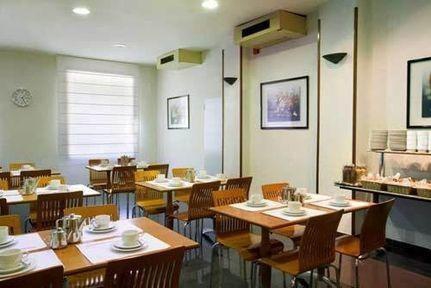 Near the Barcelona Hotel Medium Abalon, visitors can find the Sagrada Familia, Park Güell, and the Sant Pau Hospital. Proximity to many bus and metro stations make it easy for guests of the hotel to travel to any of the city’s attractions, including the Gothic District and Las Ramblas. Amenities on offer at the hotel include Internet access, a breakfast and coffee room, car rental service, newspapers, and laundry service. The Medium Abalon Hotel Barcelona is situated 16 kilometers from the Barcelona International Airport. Metro stations and bus stops are located throughout the city, providing easy transport to any of the local attractions. The hotel offers a car rental service to guests, and taxi cabs can be found throughout the city.

The many guestrooms at the Medium Abalon Hotel Barcelona offer modern décor with black furnishings. In addition, rooms include climate controls, telephones, safes, desks, and wireless Internet access. Each room also includes a full bathroom as well as television.

The Medium Abalon Hotel Barcelona is a modern hotel that is located two kilometers from the city center. Within one kilometer are the many modernist buildings, cafes, restaurants, and shops that line the Passeig de Gracia.