Josep smiled apologetically at my outstretched arm and said: “Sorry, I cannot give you my hand. After the last accident, you see?”

He flashed his right palm, which looked like it had been in a sword fight, and I promptly withdrew mine.

Distant alarm bells had started tinkling long before this moment, but it was only now that they rung loud enough to rouse me from my slumber of insouciance. Josep was there with his 4x4 to whisk me and five others away from the centre of Barcelona and into the verdant heart of the Catalonian countryside, where we would hitch a ride on one of the most absurdly reckless means of transport ever concocted: the hot air balloon.

There were many reasons why I should have at least hesitated before booking such an activity, but one of the most obvious was my fear of heights, which developed at some point during that deeply confusing transitional period when my devotion to tree houses switched to free houses. Another was that one of my earliest memories involves my grandfather taking off in a hot air balloon, which was something my infantile mind deemed so awful there was nothing else for it but to commence a prolonged episode of feet-stamping and uncontrollable wailing. That was the first and last time I had seen one up close.

I scarcely need mention that ‘controlled crash’ is a contradiction in terms, and in any case, being a pedant and correcting my friend’s syntax wasn’t a priority – that could wait. It was the word ‘crash’ that caused various parts of my anatomy to shift position.

Had I taken a moment to glean even the most rudimentary understanding of how hot air balloons are piloted before my flight, I would have learnt that, well, they’re not really piloted at all, hence the less than perfect touchdown. Although height can be negotiated, they travel where the wind chooses to take them, which means that where they land is anyone’s guess – much like the Ryanair experience. As wind generally travels in the same direction at any one time, a significant amount of it is highly undesirable if you plan to return to more or less the same section of the planet from which you took off. 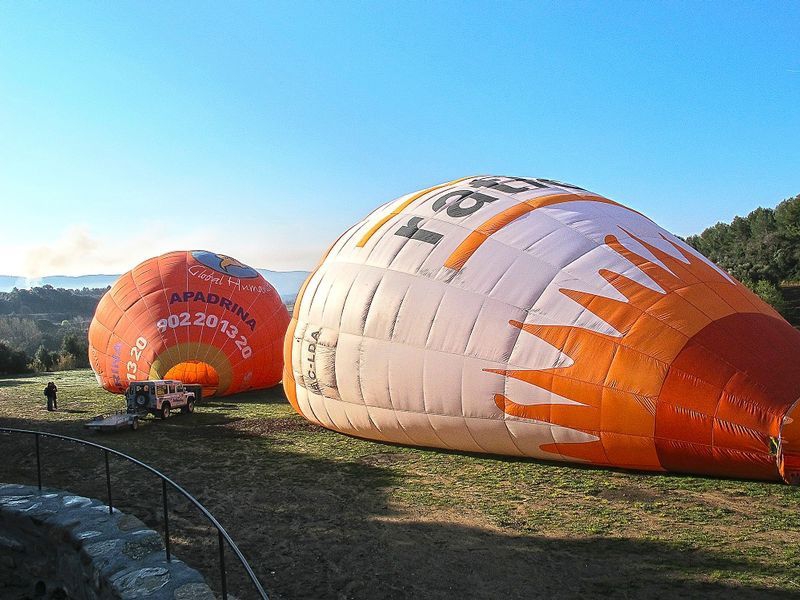 Of course, I didn’t know any of this pre-float, so when Josep took his foot off the gas about 20 minutes after leaving the city centre of Barcelona and pointed to the thick ribbons of morning mist suspended motionless over the bedewed hills of Barcelona’s outlying countryside and said: “This is good! Very good! It means no wind, you see?” it didn’t imbue me with the overwhelming relief it should have done, for he had, in effect, just told me that the trip probably wasn’t going to finish on some power cables in Algeria.

The road soon turned to a lane, the lane to a track, and after a time we stopped at a sloped clearing. It was dotted with black circles, which I assumed were the remains of campfires, but then wondered if they were scorch marks created by plummeting fireballs. I just couldn’t shake the notion that this excursion was going to end fatally.

I was immensely grateful, then, when preparations began, for they provided a much welcome distraction from my misgivings. I was even happier to learn my assistance would be required for inflation because this allowed me to pretend I had some measure of control over the situation. Once the balloon had been removed from its bag and unravelled into a long line by a couple of men who had appeared from nowhere, my job was to hold the material aloft at the basket end to create an opening into the balloon, into which air was driven by an engine-powered fan until it had inflated enough to safely receive some gusts of hot air.

Except it wasn’t hot air. Hot air is what you find in Greece in the summer. This was fire. Big blasts of ferocious fire. I suppose that all of us at some point in our lives have been foolish enough to spray an aerosol can onto a naked flame, or at least curious enough to watch someone else do it, so if you can recall that particular sound for a moment and multiply the decibels a few times, you’ll have some idea of the sporadic soundtrack of a hot air balloon ride. Alternatively, imagine a dragon sneezing. I wondered briefly why the practice wasn’t called ‘fire ballooning’, but decided that the inclusion of the f-word in the name of any kind of aeronautical contraption was unlikely to provoke a stampede of eager patrons. 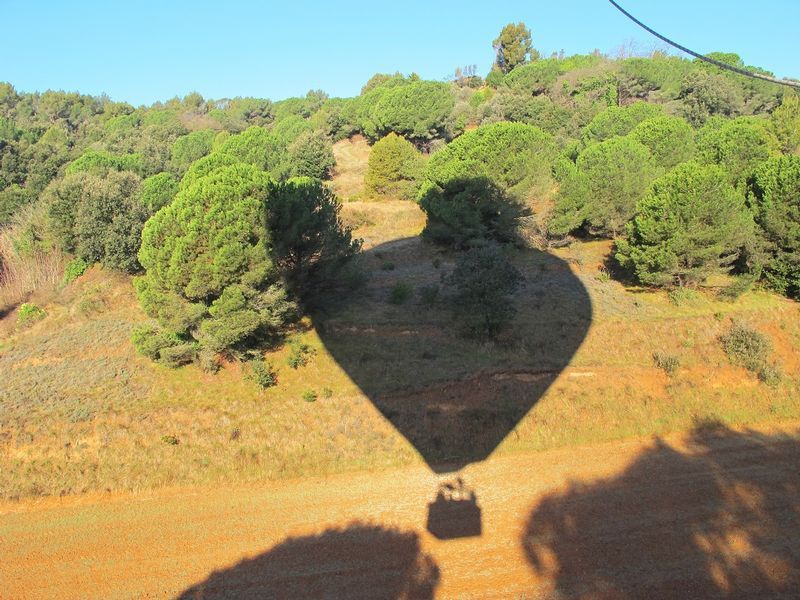 More pertinently, though, ‘fire ballooning’ sounds rather dangerous and adrenaline-fueled, which was something I was beginning to realise hot air ballooning most certainly ain’t. The memory of my grandfather’s flight must have exaggerated itself over the years, for I was expecting the thing to lurch up like a jack-in-the-box and – with a thunderous roar – yank the basket and its shrieking contents off the ground in a wild and generally petrifying manner. But instead, it was like watching a benign beast stirring from a deep sleep, gently and carefully rousing itself to an upright position, stretching, yawning contently every few seconds, filling its chest with air, until it stood proud and tall and ready to rise with the smoky dawn.

All misconceptions evaporated with lift-off. A lift-off that was so delicate that had I shut my eyes I would not have realised the balloon had become airborne. But airborne it was and, after drifting from the clearing and nudging the upper twigs of some pine trees, we began the ascent.

The views, obviously, were superior. I enjoyed how what constituted detail was redefined in line with the changing perspective, from the combed contours of a freshly ploughed field to the street plan of an entire settlement. But the most mesmerising aspect was simply being outside at such a vast height. We’ve all pressed our noses against plane windows and surveyed land from a bird’s eye view, but this was different and more meaningful in so many ways. The world outside a plane can only be squinted at through a smudged porthole. It is completely detached and devoid of context: a conveyer belt of mountains and towns and oceans and clouds that eventually amalgamates into a vacant blur.

But here, wafting about aimlessly in our creaky little basket, we had time to truly savour the grandeur of rural Catalonia, which sprawled before us in a sea of green, cradled by hazy ridges rising and falling on the distant peripheries. The view was more spherical than panoramic, and this, combined with the incredible height at which we lingered, allowed the scene a topographical completeness: everything had a beginning, everything had an end. And because we were outside, breathing the same air that was guiding us, it felt like we were part of the scenery rather than just spectators of it. 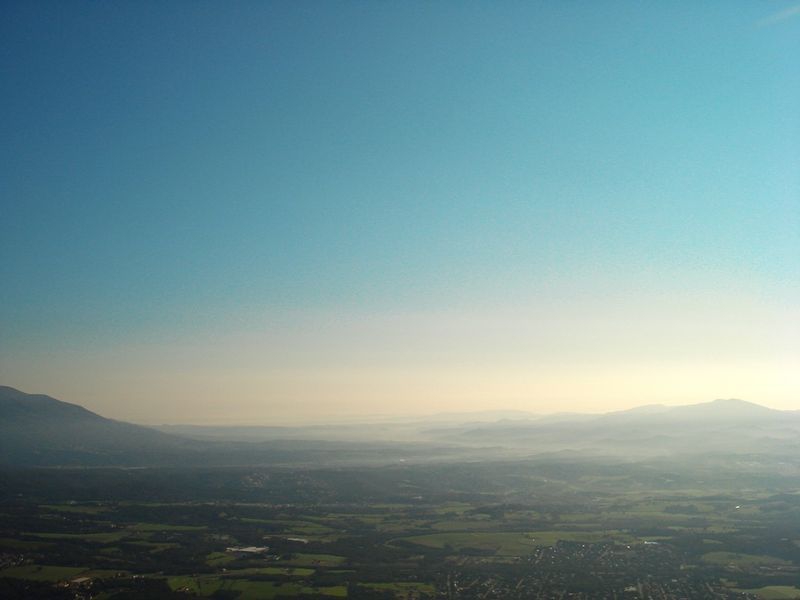 Granted, the knowledge that a glorified picnic hamper was the only thing separating me and a kilometre of gravity did inject a slight sense of menace into the occasion, but frankly I was more concerned about the proximity of my head to the burners – things were getting mighty warm up there. You will have deduced by the presence of this article that the basket held firm and that I was not transformed into a human flamethrower, and, as is customary in such situations, our hour in the air was over all too quickly.

As we began the descent, I suddenly remembered Josep and his mangled hand. He had disappeared somewhere during the preliminaries (possibly to assist with the second of the two balloons that flew that day) leaving my balloon in the hands of a quiet but – crucially – sensible looking chap. In any case, I needn’t have worried. There was a slightly hairy moment when we collided briefly with a nest of brambles, but other than that it was the most welcome anti-climax of my life.

It turned out that the vehicle that had been racing around the country tracks below us for the past hour, pausing at various intervals, was our ‘recovery team’ – not, as I had vaguely suspected, a lost and quarrelling couple on their honeymoon. The recovery team only consisted of one man and a large bag, but still, it was nice to know someone had been looking up at us.

Did you enjoy this account of ballooning in Barcelona? Perhaps you may find the following useful:

What to do in Barcelona

Will flew with Ballooning Barcelona on its ‘Discovery Balloon Ride’ which includes an hour in the air followed by a toasted sandwich upon landing and dose of Cava to settle the nerves. And a certificate. The whole experience, from pick-up to drop-off, lasts about 4 hours. Private flights can also be arranged. 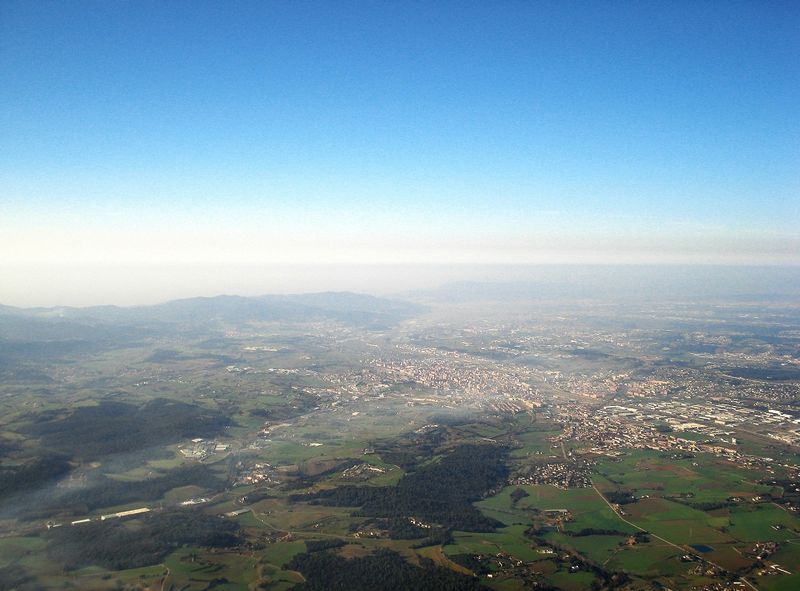 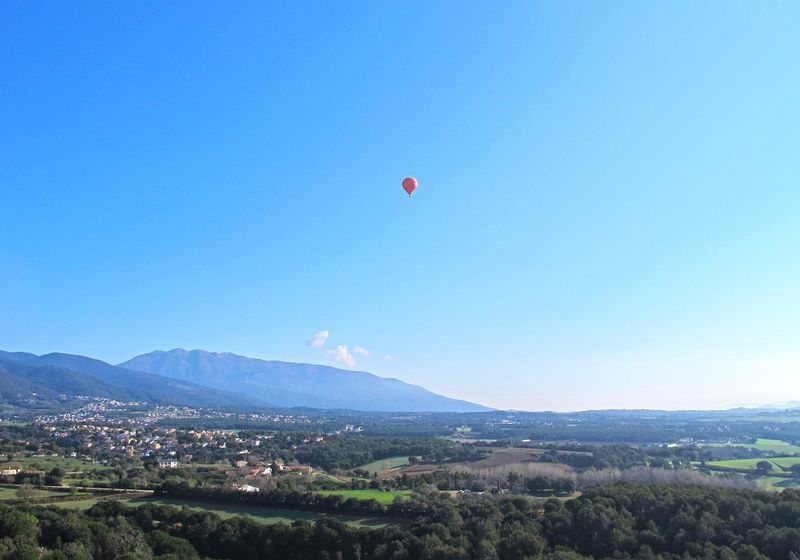 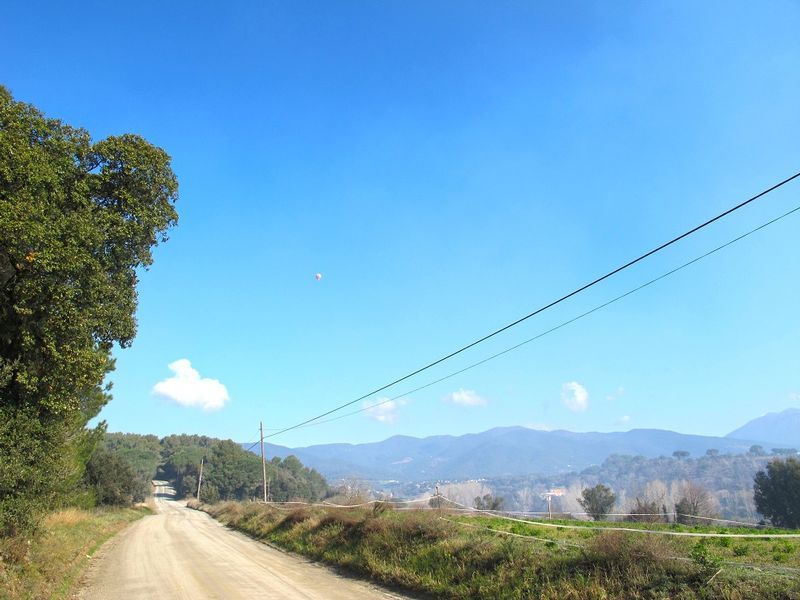 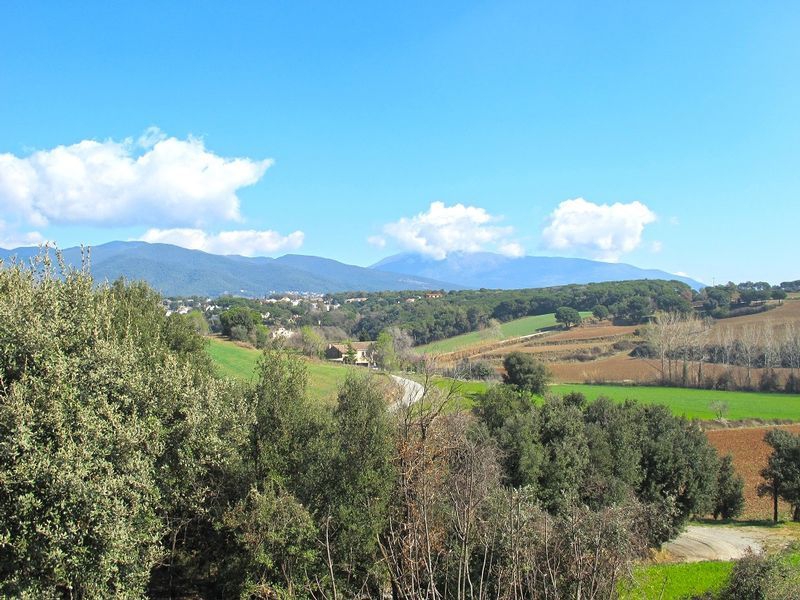