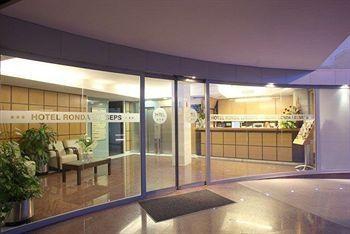 Barcelona Hotel Sagrada Familia is only a block away from the world famous Sagrada Familia. Other nearby attractions include Les Rambles, which is located only a kilometer away and the Picasso Musuem, which is 2.5 kilometers from the hotel. Many amenities and attractions are easily accessible by using the public transport systems of the city. Amenities of this Barcelona hotel include a large library, concierge service, Internet enabled computers, and a rooftop terrace as well as a restaurant. The Hotel Sagrada Familia Barcelona is located 150 meters from the nearest metro station and is also nearby the bus lines that connect visitors with the international airport as well as the many attractions and amenities of the city. Taxi cabs also offer transport around the city for guests who do not have automobiles.

The Sagrada Familia Hotel Barcelone is a three-star accommodation option that is located in the heart of the Eixample district. The hotel is near to many points of interest for visitors and is close to a number of shops, cafes, and restaurants in addition to many historical attractions.