A Glided Tour of Barcelona

On a recent Segway tour of Barcelona, I learnt that the best way to ride a Segway is to pretend you are not riding a Segway. The moment you forget this rule and peer down at your feet, you make yourself prone to debilitating disbelief, which combined with your momentum can quickly lead to alarm and reckless manoeuvres. As difficult as it may seem, you must fix your gaze straight ahead and give the machine your unconditional trust. Segways should be heard and not seen.

The reason for this is simple: a Segway, with its two parallel wheels and lack of a third, centralising stabiliser, looks exceedingly precarious to stand upon, like an exercise ball or a tightrope. In this case, however, appearances are deceptive, which was more or less what my guide – his name was Lluis – was trying to convey when he told me to: “Stop thinking! Stop looking down! Just stand normally, relax, and you will be fine.”

Myself, my partner Gemma and our local contact Núria, were in Barri Gòtic, the old town of Barcelona, taking it in turns to edge tentatively around a small clearing surrounded by high walls of ochre slabs. Soon we would have to leave this muffled little sanctuary, where the only distractions were the scrapes of metal chairs from a nearby cafe, and venture out to more crowded places. 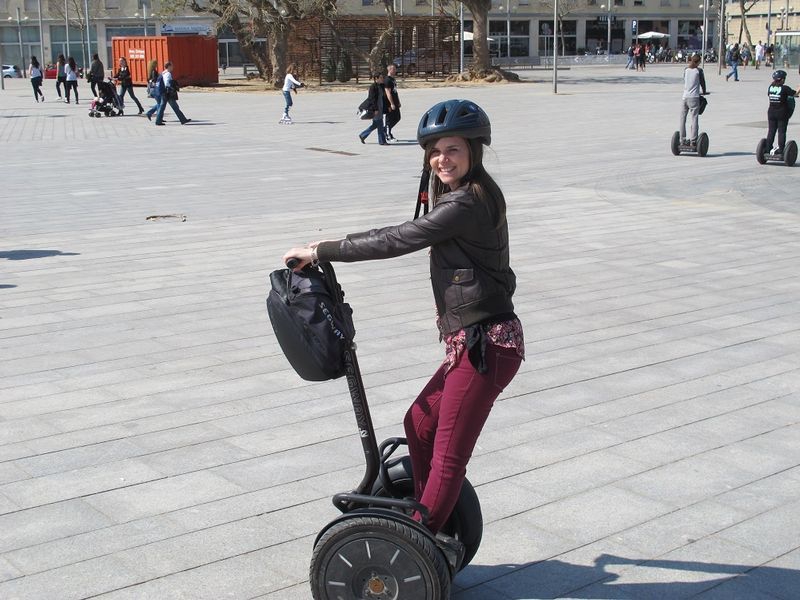 To operate a Segway you must lean in the direction you want to travel, and shift, rather than rotate, the handlebars when you want to steer. If you want to brake, you stop leaning. The Segway will take care of the rest. And that’s about it – it really is that simple. All you have to do is not look down. Never look down.

This comes naturally in a place like Barcelona city; there is much to arrest the wandering gaze. Here, in the gothic quarter, the narrowness of the tangled streets was accentuated by the height of the yellowy buildings squashed either side, like a network of slot canyons. A slither of blue sky filled the gap above, but before that were pretty balconies and weathered shutters and the occasional snarling gargoyle. Occasionally the shadowy lanes would blossom into tiny plazas, flooded with bright sunlight, but mostly this was a place of crepuscular density that offered the vaguely thrilling possibility of getting lost.

Barcelona is a place of many faces: we had started on its oldest, the very streets like a mishmash of deep-set wrinkles, but emerging onto the waterfront we found one of its most youthful and fresh. We had arrived at the Port Vell area within the Barceloneta neighbourhood, which was once a decaying embarrassment but after massive refurbishment efforts is now a gleaming success. The harbour was a white forest of masts and the smooth promenades were landscaped and spotless. And in reflection of the architectural surrealism characteristic to Barcelona, the various sculptures dotted around – a giant fibreglass crayfish, a ceramic-tiled head atop a totem pole – separated visitors from locals by way of amused double-takes. 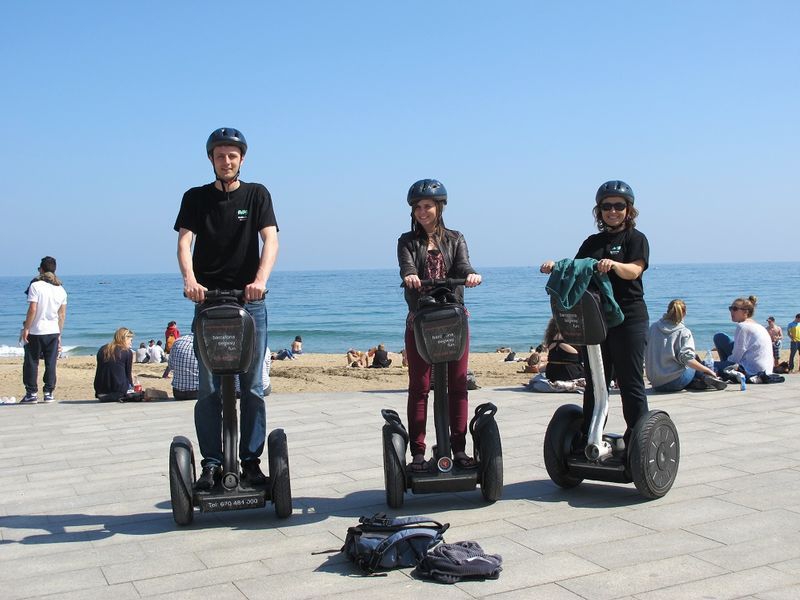 To my amazement, I seemed to have mastered the Segway relatively painlessly. Some wit once said that people on Segways stand as though they are trying to keep a coin clenched between their buttocks. Undoubtedly, as a suspicious first time user, I was still adopting this very posture, but that seemed a small price to pay for what I had quickly realised was essentially just a fantastically lazy alternative to walking. Indeed, the only occasion we surpassed walking pace was on a palm-studded wharf that stretched two or three hundred metres to the seaside.

We had reconvened (or rather, the others had paused so I could catch up) and Lluis asked: “Do you ski?” For ease of conversation I decided to lie and said yes. “Good! Then you will like this! You know slalom, ya?” I lied again. “Good! Then now we can go fast!”

In appallingly little time, the rest of the group – including my insufferably competent other half – were swaggering dots on the peripheries, so I ditched my attempts to slalom and just made a beeline for it. In doing so, I achieved a surprising amount of speed. On one side the harbour glittered in the hot afternoon sun, and on the other, the outsides of cafes and diners became a blur of sunglasses and vests and ice-creams. The whir of the Segway became higher in pitch, legions of lethargic pigeons shattered as I approached and small children gazed at me in reverence. 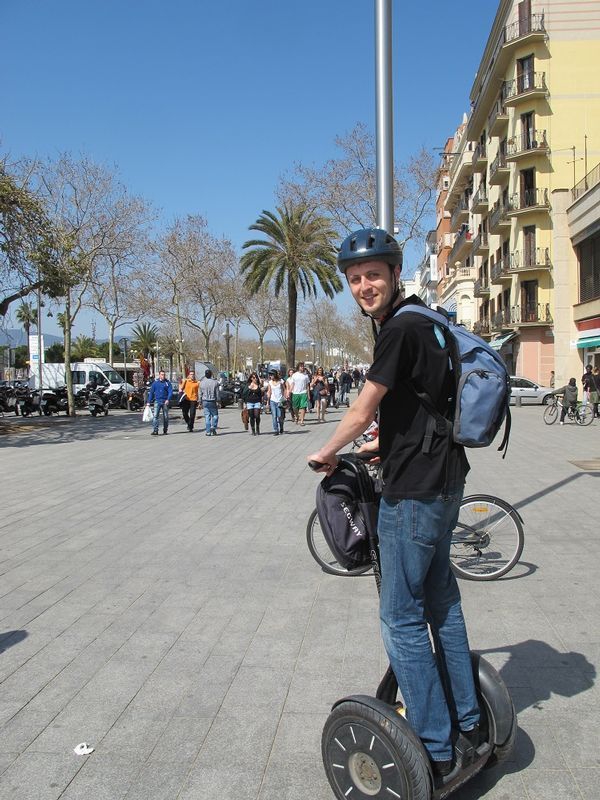 And then I looked down. I looked down and just for nanosecond – all it takes is a nanosecond – hesitated at the apparent improbability of the design. This caused me to recoil in fright, which in turn caused the Segway to slam on its startlingly efficient brakes. What followed was a frantic bucking of the hips as I tried to correct myself.

Eventually, after reverting to a more manageable pace, I caught up with the others, who were patiently waiting at the edge of Barceloneta Beach. This marked the end of our tour and the beginning of five kilometres of sandy coastline that stretches northwards until the River Besòs. We had found another of Barcelona’s faces. This one was tanned and had salt in its hair and ice cream around its mouth.

Returning back the way we came another face presented itself in the distance. This one was in the form of Montjuïc mountain, poking above the horizon and peering misty-eyed over everything. It was here I realised that my favourite thing about Barcelona was not that it laid claim to the ultimate trio of mountain, city and sea, but how naturally the three seemed to segue into one another. There was nothing for it but to stare straight ahead and enjoy the view.

Will did his Segway tour with Barcelona Segway Fun, who operate daily and offer either a 1.5 or a 2 hour tour, ages 10 and above.